Attendees enjoyed a short break to enjoy the lobby activations and enjoy the refreshments supplied by our partners. 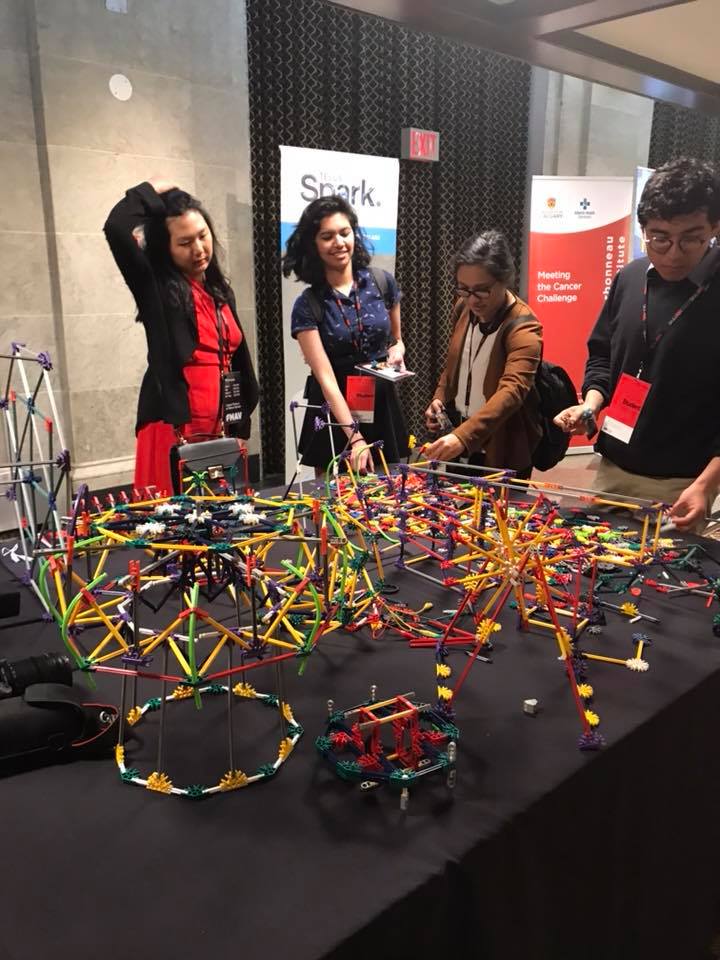 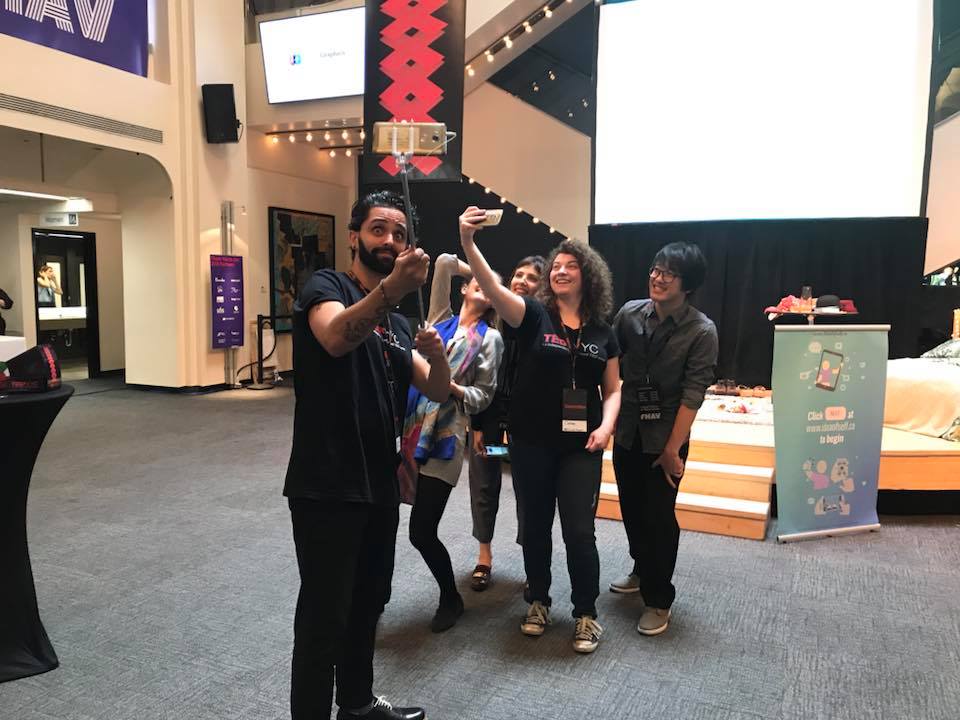 A political theorist asks:  Are we too dumb for democracy?

David started his talk by acknowledging that it’s really not pleasant for people to be called dumb. However, it’s an attention getting title he’s using for his upcoming book, and response has been surprisingly positive. He’s amused that mostly people like the title because they assume he’s talking about someone else – and therefore, they aren’t offended. He argues that our experience and our emotions will always affect our ability to make decisions, and as such, we’re usually not making rational political decisions. Even when we think we are, we have bias that affects how we view the world and therefore how we interact with it or respond to it. Democracy is flawed because we are, but the cure for democracy is actually more democracy. Just when you want to step back, is when you should really pull people back in.

What can we do to improve democracy? First, the next time you’re asked to make a political decision, take 15 minutes or so to make yourself uncomfortable. Why do I support this candidate or position, and why do I support this platform? Question yourself, and allow yourself to reflect on what is influencing your decision. Talk to those who disagree, and allow yourself to be influenced. Then write down your answers. Carve out time to do your job as a citizen and actually practice democracy. What does government need to do? Bring citizens in, often and in different ways. Not a single town hall, not a knock on the door but regular involvement and conversation to encourage democratic decisions.

Dark web, cybercrime, and the complexities of internet governance

Eric takes a pragmatic look at online privacy, and calls our life online hyper-interconnection. We have a problem with privacy, as we generate massive amounts of data as we live and share online. There are two types of data: content data is the first, and metadata is the second. Many of these data points seem innocuous on their own, but when pulled together, can tell a very detailed story about the person creating them. Once you apply big data analytics to the large amount of data we create, we get scarily accurate pictures painted of our data as we move through our online lives. Who can access this information? The websites you visit, as well as data brokers who collect your data and sell it to those who are interested in the aggregate information we can glean from it.

A second problem is the existence of the dark web, where there is little care or concern for moral sensibilities. This occurs when people feel they have the privacy to engage in online behaviour that nobody is watching. Therefore, we need to find a middle ground of privacy, a happy medium. How can we get there? Be sympathetic about people wanting privacy. Don’t give up on privacy, and explore ways to protect our individual privacy.

Jeremy came from a journalism background, but reached a revelation that there may be a very different way to approach how we investigate, report on, and respond to news. We face a huge amount of media every day and it actually makes it harder for us to respond appropriately to what we read and hear. He realized there was an enormous difference between reaction and response – and what our society needs right now is response.

He created an online news entity called The Sprawl, and deliberately set out to tell stories in a very new way. He would report on stories he wanted to tell, and go silent afterwards. He no longer tried to find new stories to tell every day, and instead focused on what he really thought should be said. The silence between the busy times was very difficult but he knew it would help him tell better stories and make more impact by doing so. It became a mission, and a movement towards silence. Jeremy encouraged the audience to take time for silence every day, and to take breaks in how we consume media. Take time to be silent so your thoughts and creativity have room to grow, then consume news mindfully.

The stage was cleared and HYMN was introduced, and instantly the room fell silent. As music began to fill the room, the audience watched Farima Berenji, who had spoken earlier in the afternoon, join HYMN on the stage as a surprise addition to the performance.

HYMN is a multi piece band with haunting vocals, and Farima’s whirling was a perfect complement. Seeing her dance after hearing her speak so passionately about it was mesmerizing. HYMN’s melodies had the entire audience silent as they listened and watching the beautiful expression unfolding before them. What a rare opportunity to see these two performances combined on the TEDxYYC stage! The room erupted into applause, cheers, and whistles once they finished.

After an astounding beginning to her young career, Kelcie’s opportunities seemed limitless. She was drawn to science at a very young age and entered the industry early. As a young athlete and active young adult, Kelcie came to a point where she realized her childhood had some concerning distinctions. Long periods of missed school and sickness overtook the time she could actively take part in her own life. Eventually her health moved her to halt university on disability leave, reduced to spending up to 20 hours a day in bed.

She created her own company in order to pursue her studies and research. She couldn’t imagine trying to finish her degree, nor holding a full time job. But she knew she still had ideas, and disability and illness would and could not stand in the way of the innovation she knew she was capable of. Her message is that creating change is possible for anyone, and that disability should never limit a person’s goals, nor what others think they are capable of.

Preparing for a future with artificial intelligence

Robin introduces us to the idea that a future with artificial intelligence is not only possible, it’s coming and we need to prepare for it. Robots and machines will absolutely be able to carry out tasks far beyond what we ever thought would be achievable. Robin says we will have to reassess our relationship with technology. We will have to reassess what we value in our society, and plan how we handle the changes that are coming.

Historically, humans are not that graceful about accepting change. Disruption can cause major revolution. No matter what the future holds, it will include disruption of how things used to be, and there will be resulting reaction from humans. As things evolve, jobs disappear, industries change and humans react. But this time it’s different. The jobs are going to machines, and machines are catching up. Do you really think a machine can’t do your job? Are you sure? What will society look like when none of us have jobs? How do we structure society when our work and jobs no longer define us? Can we find ways to contribute and add value? We’ll need to find out because the AI train isn’t stopping, it’s coming whether we’re ready or not. It’s time to be the best version of humanity we can, because this is something we’ll be facing soon, and we’ll be facing it together.

Thank you from the TEDxYYC 2018 team

A big thank you to Barb Higgins, who as event emcee, led us through an afternoon of ideas, inspiration, and possibility. She kept everyone coordinated and was a bright light between every speaker taking the stage.

Thank you to the partners, speakers, committee, Arts Common staff, and event day volunteers who made this day so amazing! The energy in the building was truly contagious, and we’ve loved bringing this event to life for all of you. All of our speakers had ideas worth spreading, and we hope you take away much inspiration to explore all the unlimited possibilities that exist in your life!

If you missed out this year, we’ll see you next year for our 10th annual TEDxYYC!